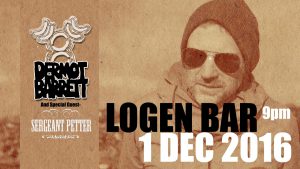 The NEW rescheduled date for Dermot Barrett ‘s first full solo show in Bergen. The wonderful folk at Logen have been great and, because it is a little earlier in the evening, we have the honour to announce that the wonderful Sgt Petter will be a special guest to come play his songs(new and old!).

“For the first time Dermot Barrett, who has been an almost a secret resident in Bergen, will do a concert! The former lead singer of the indie band Ten Speed Racer, the man behind Maskedman, finally comes to play some of his music to the Bergen audience! An intimate and acoustic show!”

Sergeant Petter, is considered one of Norway’s most talented and original songwriters after his debut album, ‘It’s a Record’, surfaced in 2003. Sgt. Petter’s second album, ‘Monkey Tonk Matters’, appeared in 2005, once again receiving great reviews. The album was nominated for the Norwegian Grammy Awards. As well as releasing another slew of solo records to rave reviews, he is also a regular collaborator with at least a dozen other artists and bands. He is also a member of The Thank Yous, and Bergen Supergroup – Evig Din For Alltid.