Sport in Ireland is popular and widespread. Levels of participation and spectating are high on the island of Ireland, but as in other western regions, participation has been dropping due to the increasing popularity of other activities such as watching television and playing computer games. Throughout the country a wide variety of sports are played, the most popular being Gaelic games (such as Gaelic football, hurling and camogie), soccer, rugby union and boxing.

In Ireland many sports, such as boxing, cricket, rugby union, Gaelic football and hurling, are organised in an all-island basis, with a single team representing Ireland in international competitions. Other sports, such as Association Football, have separate organising bodies in Northern Ireland and the Republic of Ireland. At the Olympics, a person from Northern Ireland can choose to represent either Ireland or Great Britain. 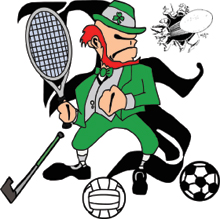